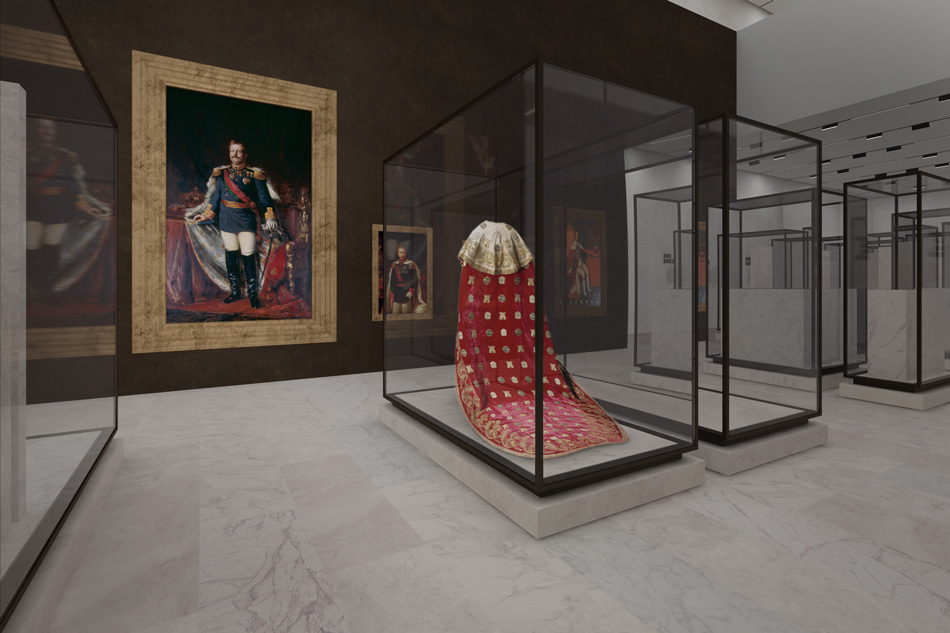 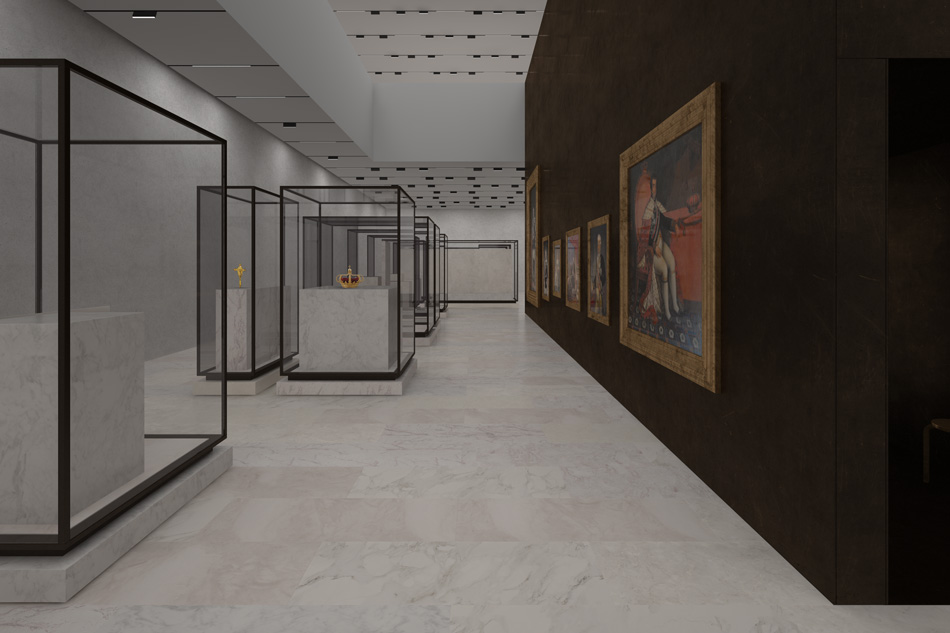 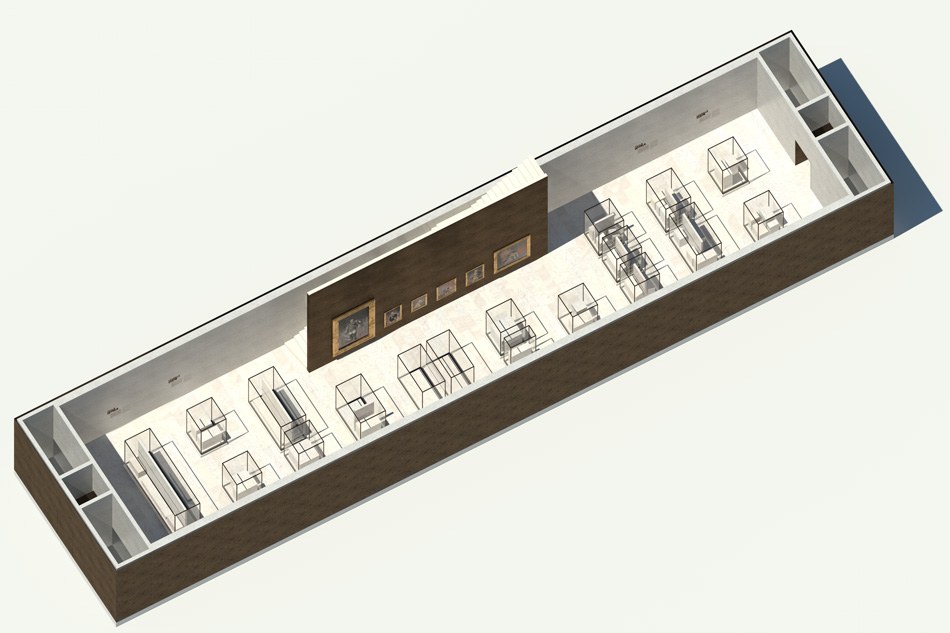 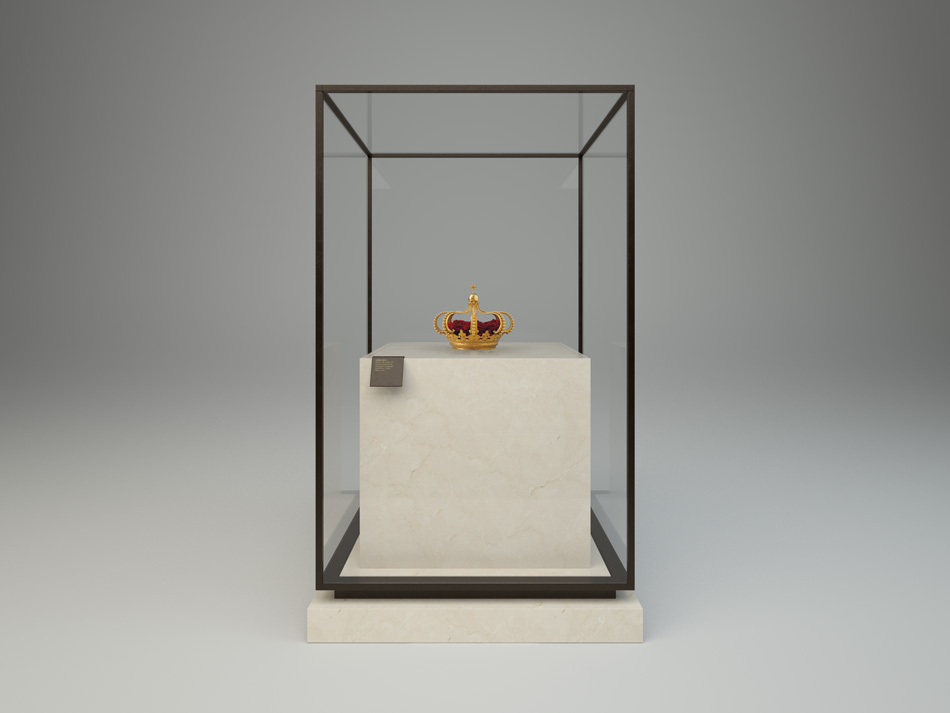 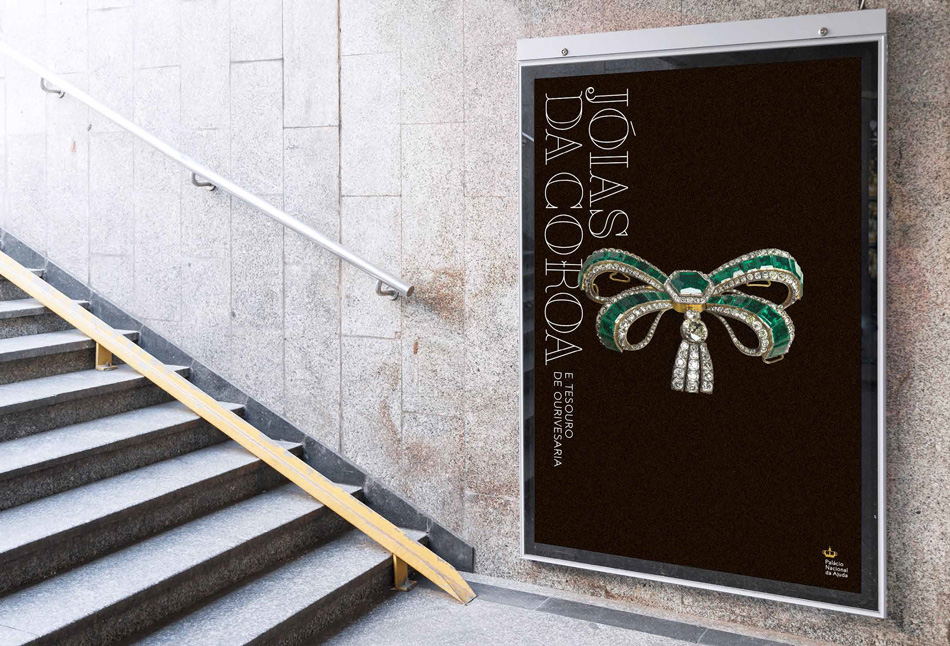 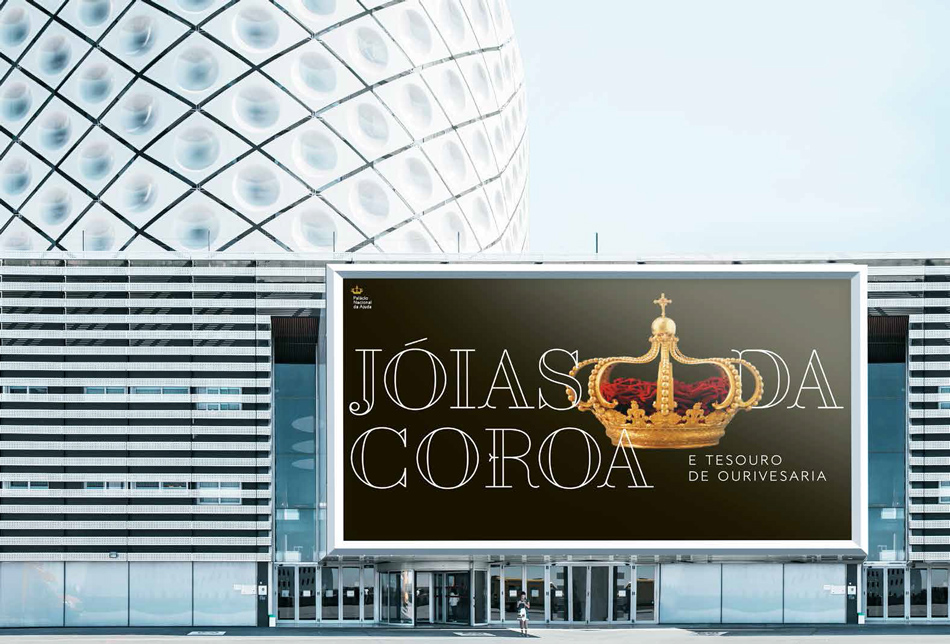 Design bid for a competition promoted by the Lisbon Tourism Association.

The project for an exhibition space with characteristics as particular as those involving the permanent exhibition of the Portuguese Crown Jewels in the West wing of the Palácio Nacional da Ajuda (PNA), posed the challenge of reconciling two essential themes: the contents - rare pieces, of remarkable material and artistic value - and the architectural space (container / vault to be built within the new wing of the Palace) that would welcome the contents and with which it should relate in a close and harmonious way.
In the specific case of the vaults, since there was no pre-existence that indicated guidelines or relationships to consider, it was necessary to prefigure an exhibition apparatus, within a space that did not yet exist. If, on the one hand, the contents were already selected and perfectly characterised, the container space was still a virtual entity in need of materialisation, a context to be invented.
In this sense, confronted with a blank space, the bid sought, first of all, to architecturally and plastically characterise the container space in order to create a suitable scenario to display the contents.
The vault, by nature, does not predispose a relationship with the adjoining spaces or with the outside environment. On the contrary, it induces closure and an introspective and self-referenced spatial logic, whose characterisation would depend only on its content and dramaturgy, to be established around the staging of royal representation in different contexts.
For visitors convenience, but also for the unity of the exhibition space and because it is understood that this is the solution that best expresses the grandeur of the royal treasury, a unique exhibition space was suggested. A large central space with double height was created and an interior staircase directly connected the two floors.
The exhibition contents would occupy the central area of ​​the room, freeing the perimeter space for circulation. The double height area would allow a panoramic view of the pieces from the upper floor. On the second level, two exhibition areas were suggested at each end of the room. The Germain Servir Set would deserve special mention and would be presented in two horizontal tables / showcases in a recreation of Royal Table.
The organisation of the space was designed to enable two complementary exhibition routes, which correspond to visiting options of different length and typology, as requested in the client brief.
The first route included the most emblematic pieces. Once the visit to this space was over, the visitor could choose the exit route on the same level, or extend the visit to the top floor. An alternative access by elevator from the lobby was maintained, thus ensuring universal accessibility to the entire exhibition. In the longest route, the tour would go through all the exhibition areas, exiting next to the cafeteria.
The exhibition paths described a continuous line around the different nuclei, interspersing moments of tension and proximity to the works, conducive to a detailed and lengthy observation, with others of further distance for a broader and more contextual contemplation.

Sober and timeless materiality was planned for the container space, expressed in the use of superior quality materials and in the excellence of its execution. The vault exterior was to be covered with bronze plates, on which low relief geometric motifs, inspired by the delicacy and refinement of the jewellery works shown in the pieces on display, would be inscribed.
As for the interior materiality, use of cream tint limestone from the Lisbon region was suggested for the floors. Echoing the perennial and serious materiality of the floor, the walls would be in exposed concrete, also cream in color. The walls would be have incrusted bronze or brass elements with adequate texture and granulometry, in order to guarantee a uniform neutrality contrasting with the exuberance of the exhibition contents.
Objects were to be displayed on stone plinths in tempered glass showcases, consisting of a light bonze structure framework with a pedestal in the same material. Although following a common geometric module, the showcases could vary in shape and size, depending on the characteristics of the pieces and their presentation mode (separately or grouped in thematic sets or by formal affinities).
In general, the showcases would be equipped with lighting equipment and, in cases where the special preventive conservation requirements so determined, they would be equipped with the appropriate temperature and relative humidity control systems.

Palácio Nacional da Ajuda is a Portuguese national monument. Its construction began in 1796, replacing the existing Real Barraca, that had been built in wood to better resist earthquakes, when the sumptuous Paço da Ribeira was destroyed in the earthquake that devastated Lisbon in November 1755. After five years of construction, the construction works were suspended in 1802 so that the project could be adapted to the new neoclassical tastes, a task that never came to be fully realised, with the Palace remaining unfinished. As of 1968 part of the building was transformed into a museum, presenting a relevant collection of furniture, silverware and jewellery. In 2018 work began on the construction of the West Wing, thus ending the unfinished Palace and where it was planned to install a vault to receive the Portuguese Crown Jewels collection.