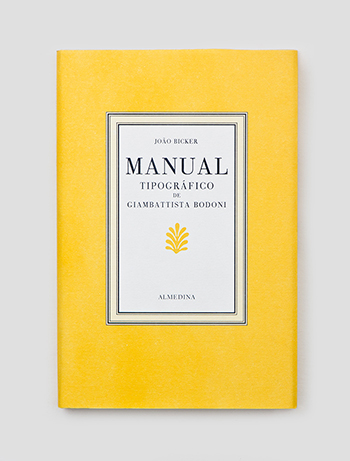 Manual Tipográfico by Giambattista Bodoni is the second title in a book series on typography published since the year 2000. The series is a labour of love by Almedina and FBA with the aim to honor the design and the history of typography.

Giambattista Bodoni, Italian typographer and printer, was born on February 26, 1740 in Saluzzo, northern Italy.
Considered the most important typographer in the eighteenth century, in1788 he published a handbook that precedes the one that would be the testimony of all his creative life: "Manuale Tipogafico, from 1818, published five years after his death.
For Bodoni, the beauty of the texts resided in the letters and was based on four fundamental virtues: regularity, sharpness, good taste and grace.
in Books & Editorial

Original title of the text by G. B. Bodoni

A forma das Letras  A manual on the anatomy of type
Albrecht­ Dürer. "Do Desenho das Letras"
Almedina Legal Editions
Essay on Typography